See below text or click here for article on webpage.

The following is a guest blog post from Joel R. Primack, Distinguished Professor of Physics Emeritus at the University of California, Santa Cruz. Dr. Primack served as Sigma Xi’s president in 2018–2019.

The James Webb Space Telescope is now successfully assembled, and it has arrived at its home a million miles from Earth on the opposite side of the sun. Webb is a huge leap in astronomical observing power. Its pathbreaking observations will surely transform our view of the universe. It will enable us to look back in time to see the first stars forming and exploding in the first galaxies. It will be able to see the light from planets around nearby stars while blanking out the stars’ much brighter light, which may allow it to see the signatures of life. The Webb Space Telescope is an international collaboration built by the U.S., Canada, and the European Space Agency, and launched by a French rocket. It will join several other new astronomical instruments that are now in operation or under construction, each of which has a special superpower. Thanks to these ongoing technological improvements in telescope capabilities, astronomy is enjoying an exponentially expanding universe of data.

Theoretical astrophysicists like me have been making detailed predictions about what all these telescopes will see. But we theorists can never tell you what’s true, just what’s predicted according to current understanding. Our theories are likely to have left out some crucial ingredients. Only observations and experiments can tell us what’s true. Interpreting the observations forces us to improve our theories. Thus, the progress of science depends crucially on getting new data.

Webb’s most important superpower is its ability to collect and analyze light of much longer wavelengths than visible light, including heat radiation from planets and the light from very distant galaxies. Our ears can hear up to ten octaves (factors of 2) of sound wavelengths, but the light that our eyes can see — the main light emitted by long-lived stars like the sun — is less than one octave of light wavelengths. Hubble Space Telescope’s Wide Field Camera 3, installed in the last service mission in 2009, can see about four octaves of light wavelengths, making galaxies whose light was emitted about ten billion years ago the most distant galaxies all of whose visible light Hubble can see. This is because the wavelength of light from distant galaxies expands with the expansion of the universe, so light that was once visible shifts into longer infrared wavelengths. The earlier the light was emitted, the farther away the galaxy is now, and the more its light has shifted. There is so much expanding space between us and the galaxies that emitted light ten billion years ago or earlier, that these galaxies are now moving away from us faster than the speed of light. 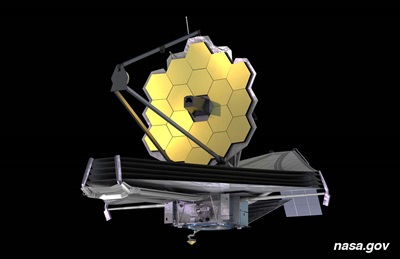 Webb’s 21-foot diameter segmented mirror will collect almost ten times more light than Hubble’s 8-foot mirror. And Webb’s much more advanced cameras and spectrographs can record and analyze the once-visible light whose wavelengths have expanded by a factor of about 20, revealing stars formed in the first galaxies about 200 million years after the Big Bang. These first stars were made only of hydrogen and helium, the two lightest elements, which formed in the first few minutes after the Big Bang. Theory predicts that these first stars were much more massive and much brighter than the sun. During their brief lives of only a few million years ending in gigantic supernova explosions, these stars began the process of forming all the heavier elements, which were then incorporated into subsequent generations of stars and planets. Webb will be able to see these first supernovas and we expect that Webb will also help us understand the mysteriously rapid formation of the supermassive black holes that power the earliest quasars.

Like geology and evolutionary biology, astronomy is a historical science. The goal of the historical sciences is to reconstruct the past and thereby understand the present. But astronomy has a great advantage over these other sciences. Landforms on Earth erode and only a tiny fraction of organisms fossilize, but almost all the energy that was ever radiated by galaxies is still streaming through the universe in some form. The trick is to be able to detect all this light and be clever enough to understand it. The most violent astronomical processes emit very short wavelengths of light, some of which are absorbed by dust. That heated dust re-radiates the energy at longer wavelengths. To figure out what happened in the cosmic past, it is therefore necessary to see the entire electromagnetic spectrum, from the highest energy gamma rays to the longest wavelength radio waves. Fortunately, the new observatories on the ground and in space are making this possible.

Who else is in the super-telescope league with Webb? Here are my favorites:

National Science Foundation’s LIGO opened a new window on the universe when it started detecting gravity waves from merging black holes in 2015. LIGO is now working with the VIRGO gravity-wave detector in Italy and they will soon be joined by similar detectors in Japan and India. The LIGO-VIRGO discovery of gravity waves from merging neutron stars in 2017 led to the discovery that such neutron-star mergers generate many of the heaviest elements in the universe, including most of the silver, gold, and uranium.

The European Space Agency’s Gaia satellite, launched in 2013, is mapping more than a billion stars in our Milky Way galaxy so precisely that it can measure their velocities across the sky by seeing how their locations change over a few years. This is allowing us to run the clock backwards, showing that many of these stars came from other galaxies that were eaten by the Milky Way.

The eROSITA instrument, on a German-Russian satellite launched in 2019, is an X-ray telescope that for the first time is cataloging the 100,000 brightest clusters of galaxies and the brightest quasars over the entire sky.

DESI, the U.S. Department of Energy’s Dark Energy Spectroscopic Instrument on the Mayall telescope at the Kitt Peak National Observatory in Arizona, is measuring the redshifts of 100,000 galaxies per night more than ten times faster than ever before. In a few years of operation, it will increase the number of mapped galaxies by more than a factor of ten. By precisely measuring the expansion history of the universe over the last ten billion years, eROSITA, DESI, and other instruments, including the European Space Agency’s Euclid satellite, will help determine the nature of dark energy, the energy powering the accelerating expansion of the universe.

The NSF-DOE Vera Rubin Observatory in northern Chile will see its first light in late 2022. It is the first wide-field giant telescope and its Legacy Survey of Space and Time (LSST) will soon begin making a high-resolution movie of the entire southern sky. All the conventional telescopes in the world together discover a few thousand supernovas per year, but we expect that the data gathered by LSST will reveal 10,000 new supernovas each night.  Adding together all the light observed by LSST will lead to a catalog with information about 20 billion galaxies.

In a few years NASA will launch the Nancy Roman Space Telescope which is like Hubble on steroids. Every image of the sky from Roman Space Telescope will cover about 100 times the area of each Hubble image with almost the same resolution as Hubble, allowing Roman to act as a finder telescope for the distant universe. It will also discover and help to characterize thousands of planets around nearby stars.

The Cherenkov Telescope Array, being built in Chile and the Canary Islands, will be a huge leap in our ability to detect the highest energy photons, most of which come from blazars, quasars whose beams happen to point in our direction. Such observations also allow indirect measurement of all the starlight emitted in the history of the universe.

The Square Kilometer Array (SKA) of thousands of radio telescopes, now being built in southern Africa, Australia, and New Zealand, will discover how the universe evolved during the cosmic dark ages, before the first stars formed. It will provide exquisite new tests of cosmological theory. SKA will also be a huge leap in our ability to detect radio signals from planets around other stars, invigorating the search for extraterrestrial intelligence (SETI).

It is remarkable that many billions of dollars are being invested in these new astronomical facilities, even though they will not lead to cures for diseases or other direct human benefits beyond new knowledge. But astronomy is a gateway, attracting young people to learn more about science and technology. Astronomical discoveries in the past have had profound impacts on humanity and our understanding of our place in the universe. This will no doubt continue to be true. Such discoveries may be among our era’s greatest legacies for the future.